Short description
The windmill from the village of Bor (Kholmogorsky district, Arhangelsk region) was built in 1744, was transported to the museum of wooden architecture "Malye Korely" (Arhangelsk region) in 1968. Smock mill with inside winder, automatic sack hoist, four sails and two pairs of millstones. Sheathed Log construction. Was used as a flour mill (flour). 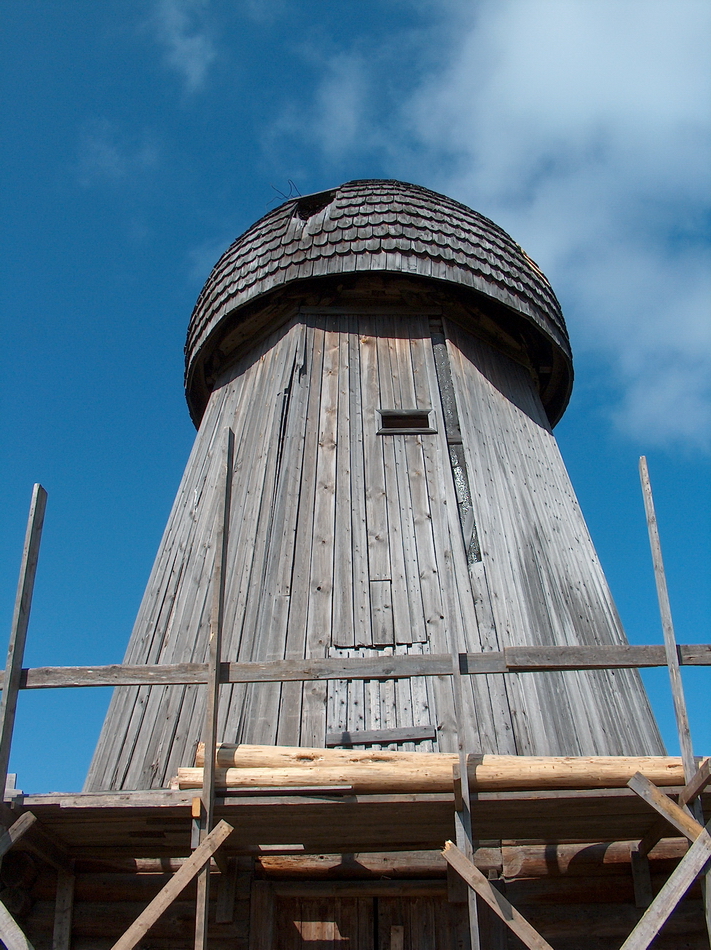 The mill from the village of Bor is the first exhibit to be transported to the museum in Malye Korely, which is the largest open-air museum in Russia. Besides, the mill is the earliest in our database with the exact date. It is more than 250 years old.

Two mills, this one and the mill from Rovdina Gora, are unique. They are the only smocks with an internal winder. This means that the cap of the mill can be turned from the inside, using the steering wheel. The cap moves along the rack, being fixed from below and from the sides by rotating iron rollers.

Other differences between Rovdina Gora and Bor mills from all other Russian mills is the balcony design: additional triangles were cut into the four-side mill base, providing a rounded balcony, necessary to regulate the surface area of the sails by removing and putting boards on them.

The cap of Bor mill has been rebuilt, so there should not be any shingles on it. However, it has preserved a platform to keep watch of the area, which can’t be found in any other mill (in the village of Rovdina Gora it has not preserved). Its purpose is not entirely clear, but, apparently, it was necessary to determine the direction of the wind, because the mill turned from inside. In addition, there are sack hoists in the mill: a manual one as in many post-based mills, and an automatic one that is rotated by the vertical shaft with the help of a clever system of ropes (unlike smooth wheels used in the mill of the village of Zaval, Novgorod region). Apparently, this hoist was added to the mill a little later.

There are only two mills of this type left, and in the past such mills were found only in the delta of the Northern Dvina river and in Holland. These mills are living monuments of the influence of Dutch merchants on Kholmogory even before the construction of the city of Arkhangelsk began. In the future, after the first settlers left Holland, the mills didn't play the defensive function any longer, they became less massive and were able to be turned from the ground with the help of a tailpole. But they didn't find out about this in Kholmogory. The growing and developing Arkhangelsk port attracted new settlers, and Kholmogory remained a “reservation” of early Dutch mills, which have their cap turned with the help of the steering wheel, like on board the ship.