Windmill from the village of Germanov Pochinok (museum «Kostromskaya Sloboda»)

Short description
The windmill from the village of Germanov Pochinok (Soligalichsky district, Kostroma region) was built around the 19th century, was transported to the museum of wooden architecture "Kostromskaya sloboda" (Kostroma region) in 1969. Inverted postbased mill with six sails and one pair of millstones. Log construction. Was used as a flour mill (flour). 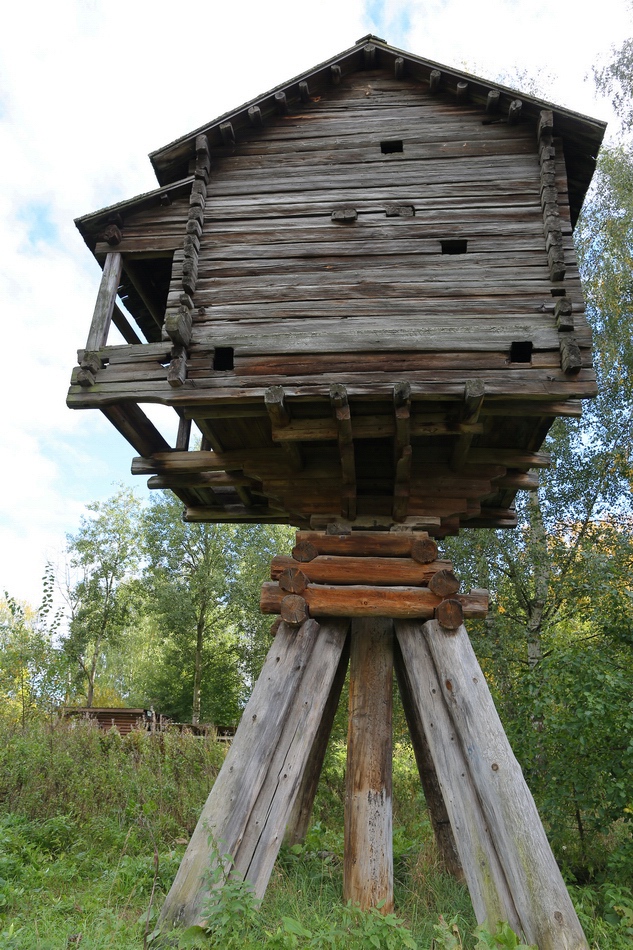 It is an inverted post-based mill. In the sources that categorize mills depending on the type of ryazha (crib), this construction can be called a mill on racks, posts or stakes. There are four posts under three-log ryazha (crib), which holds the barn. It's one of the three mills with a similar base.

The structure of the tailpole is interesting: it is made up of two logs instead of one, as in Arkhangelsk mills, and both logs are attached to the rear wall of the barn, and not to the side walls, like in Vologda mills. The ladder down to the ground starts from the middle of the porch. However, unlike the neighboring post-based mill, above the ladder there are clearly visible holes for the hooks (kuritsi in Russian) that it was hanging on. Inside the mill, the camwheel did not fit in because of its size, so they cut it into the floor and the walls – quite an interesting solution. In addition, the wallover clearly shows it got broken at some point, most probably during the operation of the mechanism. If you are attentive, you will also notice the windshaft of the mill lying on the ground next to it. It can clearly never operate again, but it still can be used for the measurements. The mistery of the mill is the diagonal hole on the fastening of the wallover. Probably, these are the remains of a brake (there hasn't been a single brake in the inverted post-based mills that has survived), or maybe something else.

The mill has preserved enough of its machinery so it's possible to talk about its functional restoration. The place where it was built in the sixties has been now covered in trees, so it is impossible for the mill to work here. We want to believe that sooner or later it will be functionally restored and will be able to face the Volga winds.

Now there are no ladders to the mill, and they are not indicated anyhow on the museum scheme. Nevertheless, it is not difficult to find it next to the mill.