Windmill from the village of Gorka ("Kirillo-Belozersky Monastery" museum)

Short description
The windmill from the village of Gorka (Kirillovsky district, Vologda region) was built around the 19th century, was transported to the local history museum "Kirillo-Belozersky Monastery" (Vologda region) in 1959. Inverted postbased mill with six sails and one pair of millstones. Log construction. Was used as a flour mill (flour). 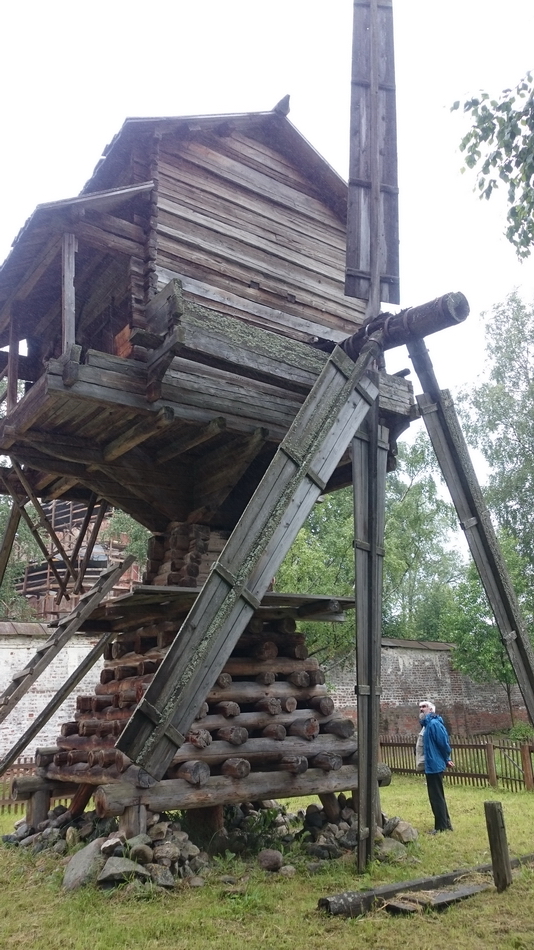 Kirillov met us with the never-ending rain. The mill looks rather depressing: two sails are on the ground, the fastening under the windshaft has rotten, the mill is locked, and there isn’t a single path leading to it. However, it is dry inside, and its ryazha seems strong and stable. More details about the mill itself (and also about where it comes from) can be found here. We will tell you something interesting about it.

The mill is an inverted post-based mill. It is one of the 11 preserved mills of this type, however, it has significant differences from the nearest ones. First, the trestle of the mill is pyramid-shaped, and inside it there are diagonal posts, so, it is something between Kostroma and Mezen mills. Secondly, this mill is bigger than the others. There is even one (preserved) mechanism for lifting the grain sacks from the first floor to the second one inside the mill. Thirdly, the ladder. Only the upper ladder on very thin poles turns with the barn. It goes "across" the porch and leads to a small platform in the middle of the trestle, from where the second ladder (absent), which is fixed and cannot move, reaches the ground. Finally, the tailpole, which is double: one of its logs reaches the corner of the barn, as in Kostroma, and the second one is attached to the wall by the porch. Such a system can also be seen in the newly reconstructed Semenkovo mill, but not anywhere else. In other respects, the mill is similar in structure and quality to other inverted post-based mills.