Short description
The windmill from the village of Kalgachikha (Onezhsky district, Arhangelsk region) was built around the end of the 19th century, was transported to the museum of wooden architecture "Malye Korely" (Arhangelsk region) in 1970. Postbased mill with four sails and one pair of millstones. Log construction. Unique details: detachable wallover, distance between the millstones adjusted by a thread. Was used as a flour mill (flour). 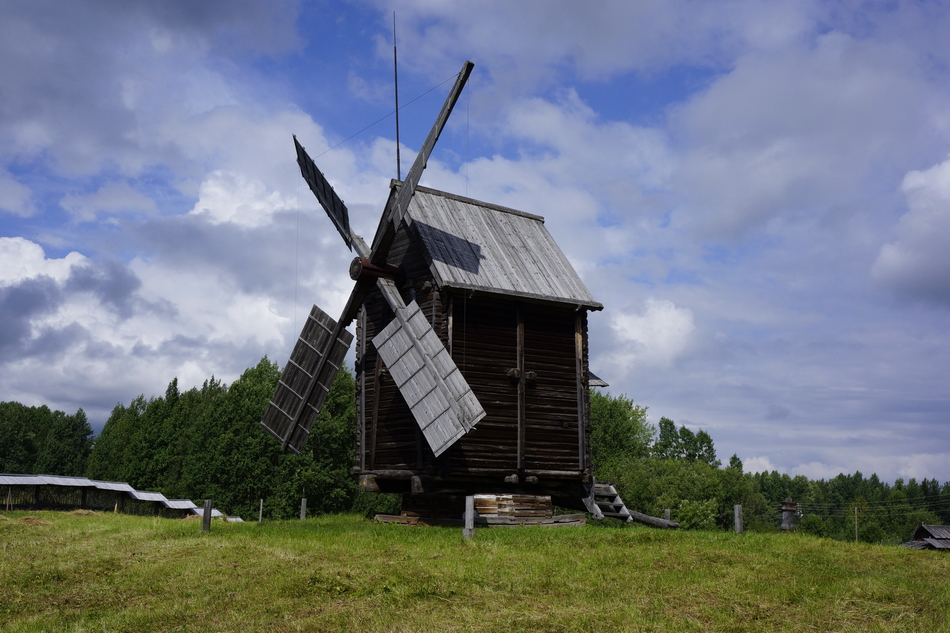 The mill from the village of Kalgachicha is one of six operating mills in Russia and the only active historical post-based mill (an operating post-based mill in Semyonkovo of Vologda region is a new mill with historical elements). The mill is started once a year: in September, during the Bread Festival.

There are several interesting details in the mill. Firstly, the wallover can be disconnected from the camwheel. To do this, the upper horizontal board, where the tailpole rests, has sort of a latch which helps to pull out the tailpole. Secondly, the height of the lower log where tailpole lies is adjusted by wedges from one side, as in all other mills, and by a threaded joint from the other side. Besides, the mill brake is quite massive, as in smocks. It surrounds the upper part of the camwheel and is adjusted by the means of a long brake block - a beam.

Like the mill in Kimzha, the mill from the village of Kalgachikha was functionally restored by the Archangelsk team under the supervision of Alexander Nikonovich Davydov.