Windmill from the village of homestead Dolzhik

Short description
The windmill from the village of homestead Dolzhik (Podgorensky district, Voronezh region) was built in 1898, is located on a historical site. Smock mill with four sails and one pair of millstones. Log construction. Was used as a flour mill (flour).

Information about the mill was checked on 22.02.2016.
The following historical parts of the mechanism have been preserved:
Sails, Windshaft, Brake wheel. 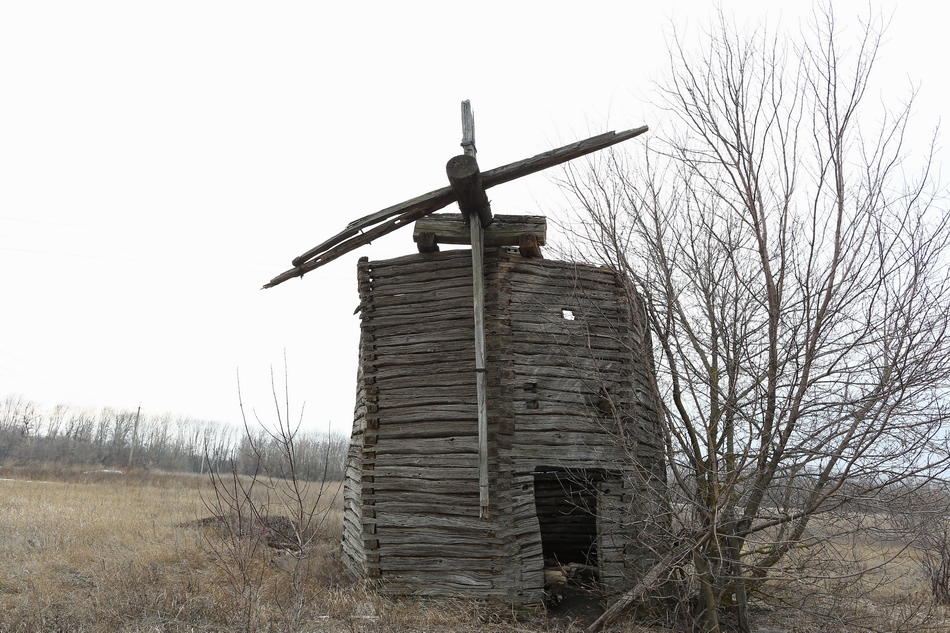 Good reports about the mill are here and here. They say that the mill was transported to Dolzhik from the neighboring village of Sergievka in the 20-s of the 20th century. According to the rules of our database, we believe that we can say that it is on its historical site.

When trying to reach the mill, do not mix up the districts. You need Dolzhik khutor (farmstead) in Podgorensky district. The mill stands to the right of the road to the village.

The mill is in ruins, which is a log construction of four logs and a rotating cap above. There is no roof, covering or even the floor of the ground floor. The broken upper millstone, the runner stone, is lying in the corner. Miraculously the sails parts still inserted in the windshaft have survived.

The mill is a representative of the widespread type of smocks and of still widespread type of Chernozem region smocks. It did not have or hasn't preserved any particularly unique parts. You can see the same but well-kept mills in Kalach Museum or Lomi homestead. However, at such speed of destruction, soon Voronezh region is going to lose all its 6 windmills on historical sites.