Windmill from the village of Rovdina Gora

Short description
The windmill from the village of Rovdina Gora (Kholmogorsky district, Arhangelsk region) was built around the end of the 19th century, is located on a historical site. Smock mill with inside winder, automatic sack hoist, four sails and two pairs of millstones. Sheathed Frame. Was used as a flour mill (flour).

The following historical parts of the mechanism have been preserved:
Windshaft, Brake wheel, Brake, Upright shaft, Wallover, Inside winder. 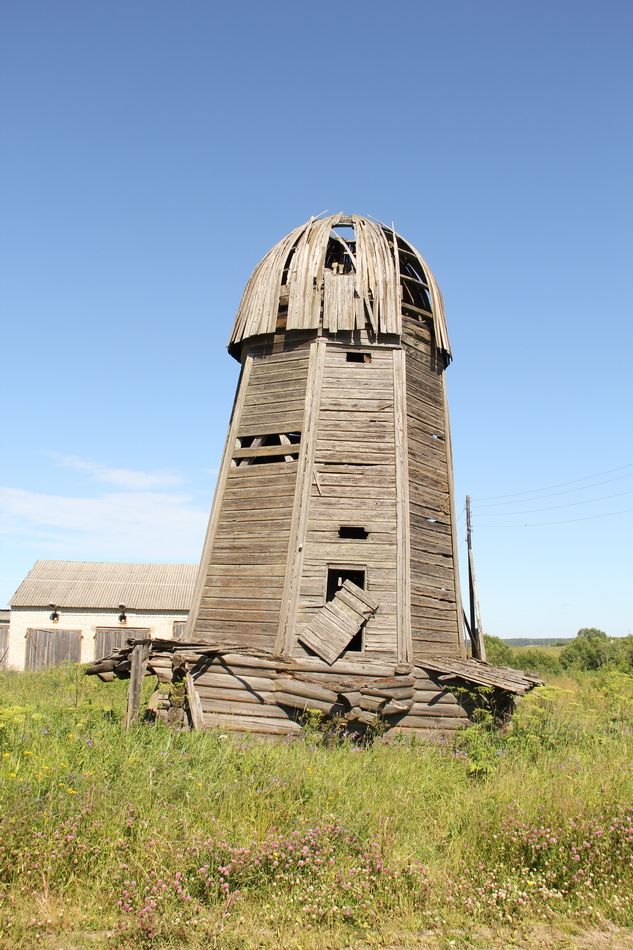 Two mills - Rovdina Gora and Bor (Malye Korely Museum) are unique, the only smocks with an internal winding mechanism. This means that the cap of the mill can be turned from the inside using the steering wheel. The cap moves along the rack, fixed from below and from the sides by rotating iron rollers.

Another thing that differs Rovdina Gora and Bor from all other Russian mills is the construction of the balcony: additional triangle constructions were cut into the four-side base of the mill, providing a round balcony. It was necessary for regulating the size of the sails by removing or putting additional boards on them.

The mill also has got a different cap design. Firstly, it is composed of bending boards, and secondly, it contains a viewing hatch. The mill of Rovdina Gora has only preserved a hole which reminds of it.

Other important things: an automatic sack hoist (although in the Bor mill it was probably made later), a conical wallover, a “clever” brake system reinforced with stones for a better grip.

There are only two mills of this type left, but in the past such mills were found only in the delta of the Northern Dvina river and in Holland. These mills are living monuments of the influence of Dutch merchants on Kholmogory even before the construction of the city of Arkhangelsk began. In the future, after the first settlers left Holland, the mills would not play the defensive function any longer. They became less massive and were able to be turned from the ground with the help of a tailpole. However, they did not find out about this in Kholmogory. The growing and developing Arkhangelsk port attracted new settlers, and Kholmogory remained a “reservation” of early Dutch mills, which have their cap turned with the help of a steering wheel, like on board the ship.

The mechanism in the Rovdina Gora mill is quite good. The mill “grew into” the ground, and as there was a car repair shop on the first floor, nothing has remained downstairs. However, the main thing in this mill is in its cap. The steering wheel, the rack, the wheels, the rollers centering the winding mechanism - all this has been preserved. The part of the windshaft with a camwheel, the vertical shaft with the wallover, the brake with logs and blocks – everything is on the historical site.

The mill in the village of Rovdina Gora is in the horrible condition. The roof and the coating are worn out, but what is worse is that the mill started to lean dangerously. It needs urgent help, at least some conservation. What’s more, in the winter of 2016 someone dismantled the second floor, so now it is almost impossible to take close pictures of the mechanism. It is the only early Dutch mill in Russia which has a fully preserved inside winder and which is on a historic site. It is the only mill with a ship steering wheel! Do not let it fall!