Windmill from the village of Stary Kiek (museum «Tatar Avyly»)

Short description
The windmill from the village of Stary Kiek (Vysokogorsky district, Republic of Tatarstan) was built in 1943, was transported to the interactive museum "Tatar Avyly" (Republic of Tatarstan) in 2009. Smock mill with four sails and one pair of millstones. Log construction. Unique details: spindle is a vertical shaft, like in post-based mills. Was used as a flour mill (flour). 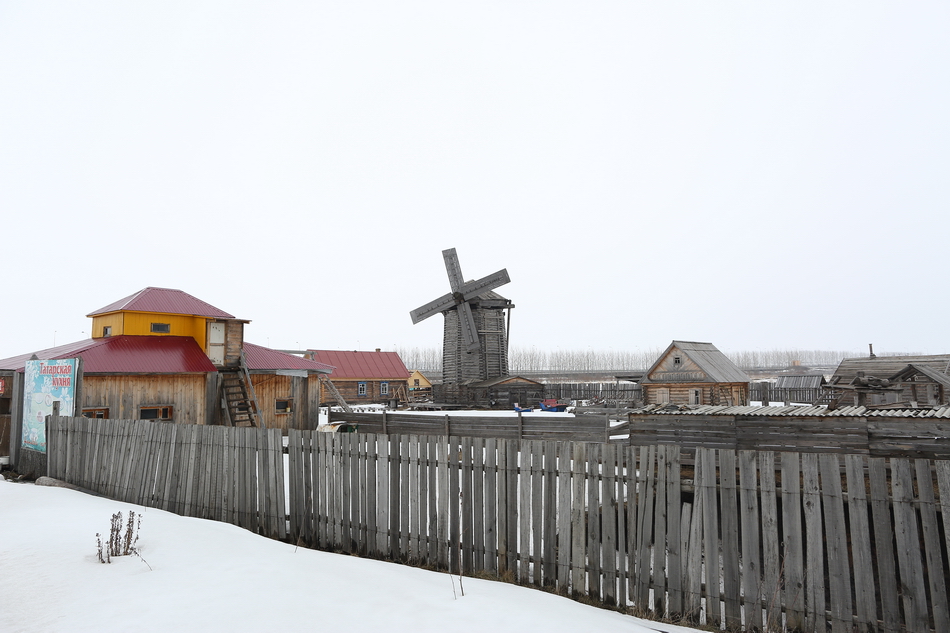 According to the stories, this mill was built in 1943 during the war. More information about the mill can be found here. In general, the main element of a smock mill is a vertical shaft, which is connected to the windshaft at the top and to the pair of millstones at the bottom. However, apparently, in the Kiek mill, the vertical shaft is at the same time a long spindle approaching the runner stone from above, as in post-based mills. If this is really so, then, apparently, this difference with the conventional design results from the time of construction. The wallower is iron, whole mechanism is very similar to the one in Kursk windmill. In addition, although it is said everywhere that the mill is working, in the pictures there is no wooden casing of the millstones, i.e. either a vat or a tray, so it is unclear where the flour goes.

The windmill was in operation in the museum until 2013. Now it is not in operation - no miller. Do you want to become a miller here?

Also in some sources it is said that some Chuvash mill was used as a “donor” for the mill mechanism. Which one? That’s what is interesting to find out.