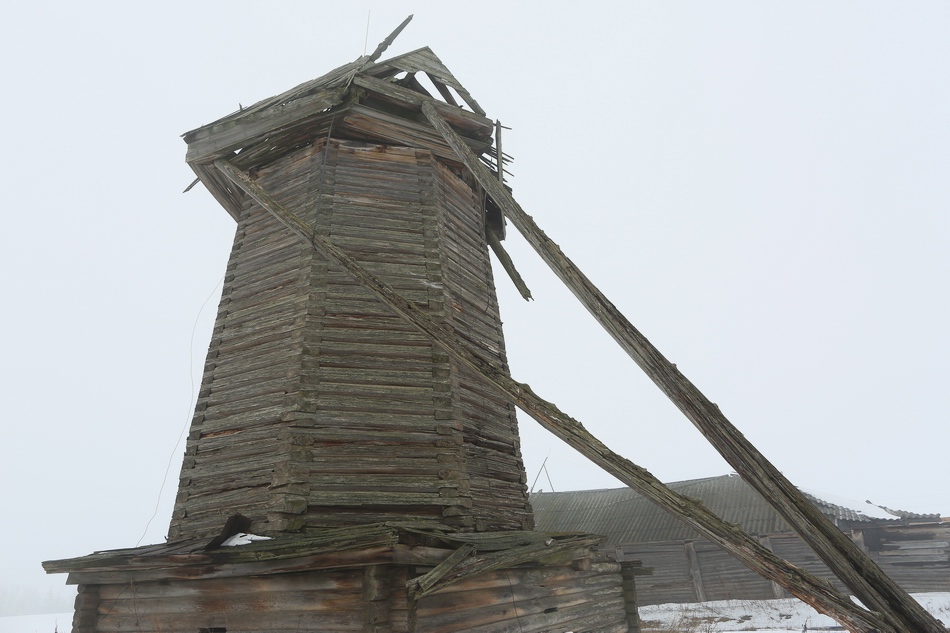 This mill of the pair is the least lucky - it hasn’t been conserved. But it should be done, no, it must be done. This place is 20 (only TWENTY) kilometers from Cheboksary, which has long been a large city attracting tourists, and sooner or later high speed trains will reach it. Losing one or both mills from Shorkino would be irreparable.

It is Volga region smock. Honestly, we got behind the locked door. The mechanism inside is very well preserved. Everything has been well preserved, look at the pictures. We are not sure, but perhaps this good state of the Shorkin machinery is the best of all Russian mills, and what is most important, all the elements are historical. At least, all the wooden parts of the millstone systems have been completely intact here.

The mill peculiar feature is double hoppers. There are hoppers on the second level, from where the grain falls into the same hoppers on the first floor, from which it goes to the millstones.

As for the owner of the mill and the year it was constructed, there wer found three mentions on the Internet:
1) "The windmill was built by an old man Stepanov Veniamin Alexandrovich, and a little later the second mill appeared."
2) "In the 20s of the XXth century in the village of Shorkino there was a successfully working windmill built in 1905-1911 by Veniamin Alexandrovich Stepanov."
3) "The left one was made by Stepanov Alexander Stepanovich, and the one to the right - by his father, besides, the left mill was better preserved, and the right mill was built in 1926-1930."
Obviously there exists some confusion, but we have decided that this mill is younger.

The windmill is on the field, that's why on the internet it is sometimes located in Syatraksy and Syatra-Khuchematy villages.

Both windmills are bought by individual entrepreneur who probably did conservation works for the other one. Let's hope both will be eventually restored to operating state.